Sarcoptic mange is a parasite. The female mite, just visible to the human eye at a third of a millimetre long, burrows a tunnel into the skin of the wombat. As the female is burrowing she is laying eggs, and the eggs and mites cause a severe allergic reaction which is why the host scratches.

Over time thick skin plaques form, and looks like a crust. When this covers the wombat’s eyes and ears, they become deaf and blind. When the wombats scratches, the skin can split and forms open wounds. In the warmer months these wounds become flyblown and secondary infections become a bigger problem.

Mange is very contagious and can affect a large cohort of animals, including dogs, birds and humans (when humans contract mange it’s called scabies).

Factors that should be considered in conjunction with mange treatment are environmental stress factors as it has been anecdotally found that wombats are more susceptible to mange when more stressors are in play.

Stressors can include but not limited to foxes, dogs, other wombats (males fight for territory), human interaction, low food and water sources (drought).

Why is it so important to treat it?

Mange is spreading fast. Traditionally blamed on foxes, mange has now gained its own momentum. Wombats often share burrows or inspect rival’s burrows and so keep spreading mange mites. The only way to truly bring the mange outbreak under control is a holistic nationwide initiative, focusing not only on the treatment regime but also on the environment.

Just treating wombats will not eradicate mange. Infected areas such as popular grazing areas and multiple burrows will keep re-infecting if not included in a holistic treatment plan.

As the majority of wombats live on private land, it is going to be imperative to start the conversation with Farmers and landholders on Government level.

Although this is a very treatable condition, without treatment there is only one outcome. The wombat afflicted with mange will slowly be eaten alive, contract secondary infections, and while suffering horribly, die over a period of months. 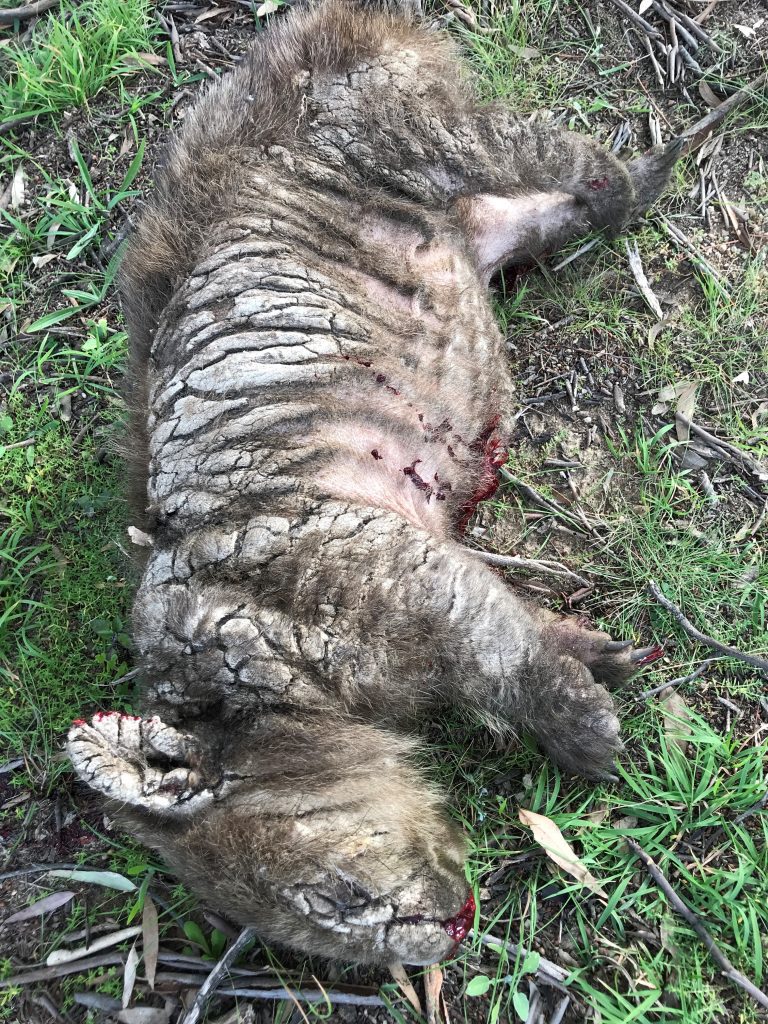 To not help these animals would constitute animal cruelty. Their suffering is enormous. We not only have an ethical obligation to save our indigenous wildlife, but also a moral obligation to help alleviate something that we as a species introduced into this country (it is believed that mange was first introduced by settlers and their dogs from Europe).

In some areas, whole wombat populations have been wiped out by the occurrence of mange. If enough mange treatment programs can take off, we stand a chance to make a noticeable impact. 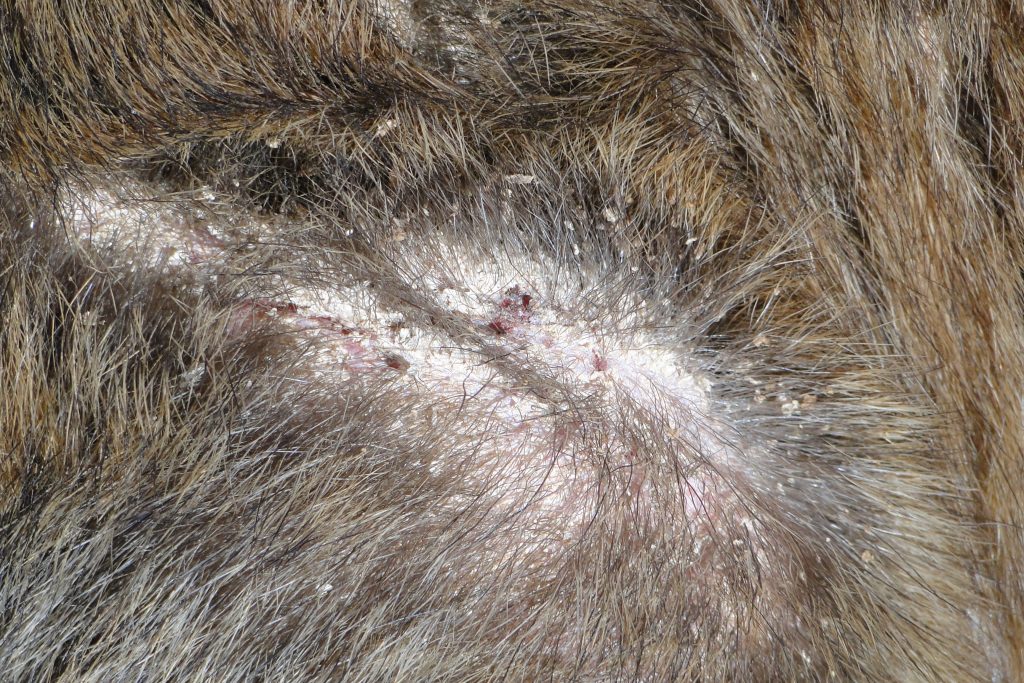 What are we doing about it?

Our focus currently is on the Googong Southern Reserve’s wombats. We are installing burrow flaps over active burrows and treat these on a weekly basis. These are placed in the burrow entrance and when the wombat exits or enters their burrow, they tilt the flap and the medicine dispenses directly onto their back.

This will continue for at least 6 – 8 months but will likely continue beyond that to ensure that the population does not relapse.

As resources becomes available, we will be able to add more flaps into more areas.

How do I know it’s mange?

Sometimes what is seen as mange, could be bitemarks so it is important to always take pictures and then contacting us or your local wildlife group.

Mange is usually first seen on the wombat’s sides, feet and belly. Gill like marks, vertical lines called striations where hair loss started in the skinfolds on their sides.

It is not unusual to see a seemingly healthy wombat, to then notice bald patches on its knees, feet and sides or cracks in the skin. This is most likely mange but best to be confirmed by someone. Bald patches on their backs only, in the absence of any other mange like markings, could likely be bitemarks from fighting with other wombats or being attacked by dogs. 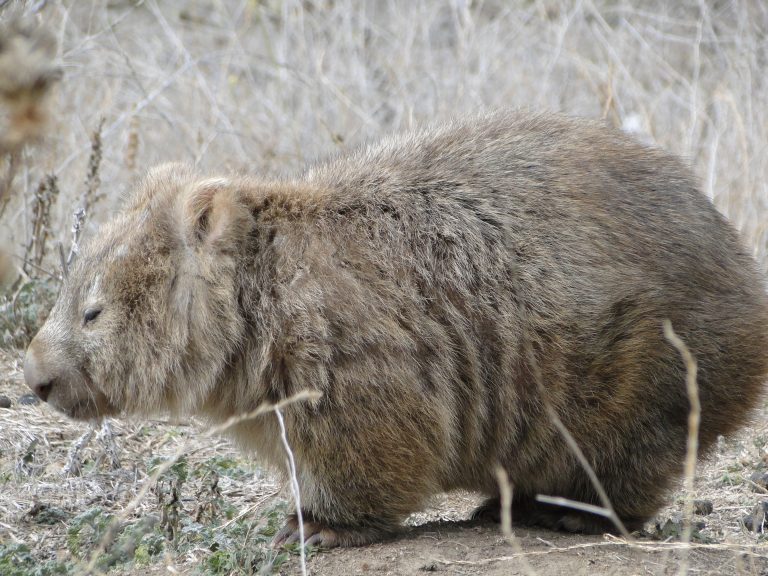 What can you do?

The medicine used to treat mange is called Cydectin (for more information please contact Wombat Rescue directly). This is a very costly product and any donations received will go toward a fund to supply more medicine.

Volunteering is another area where your help is needed. The more volunteers are available, the more burrow flaps could be installed and serviced on a weekly basis.

When you spot a burrow flap or manged wombat, do not touch either or go near it as the medicine is poisonous and mange is contagious. But when you do spot a manged wombat in your area, please contact us or any local wildlife group to report it.

If they can’t be treated, they should be euthanised. 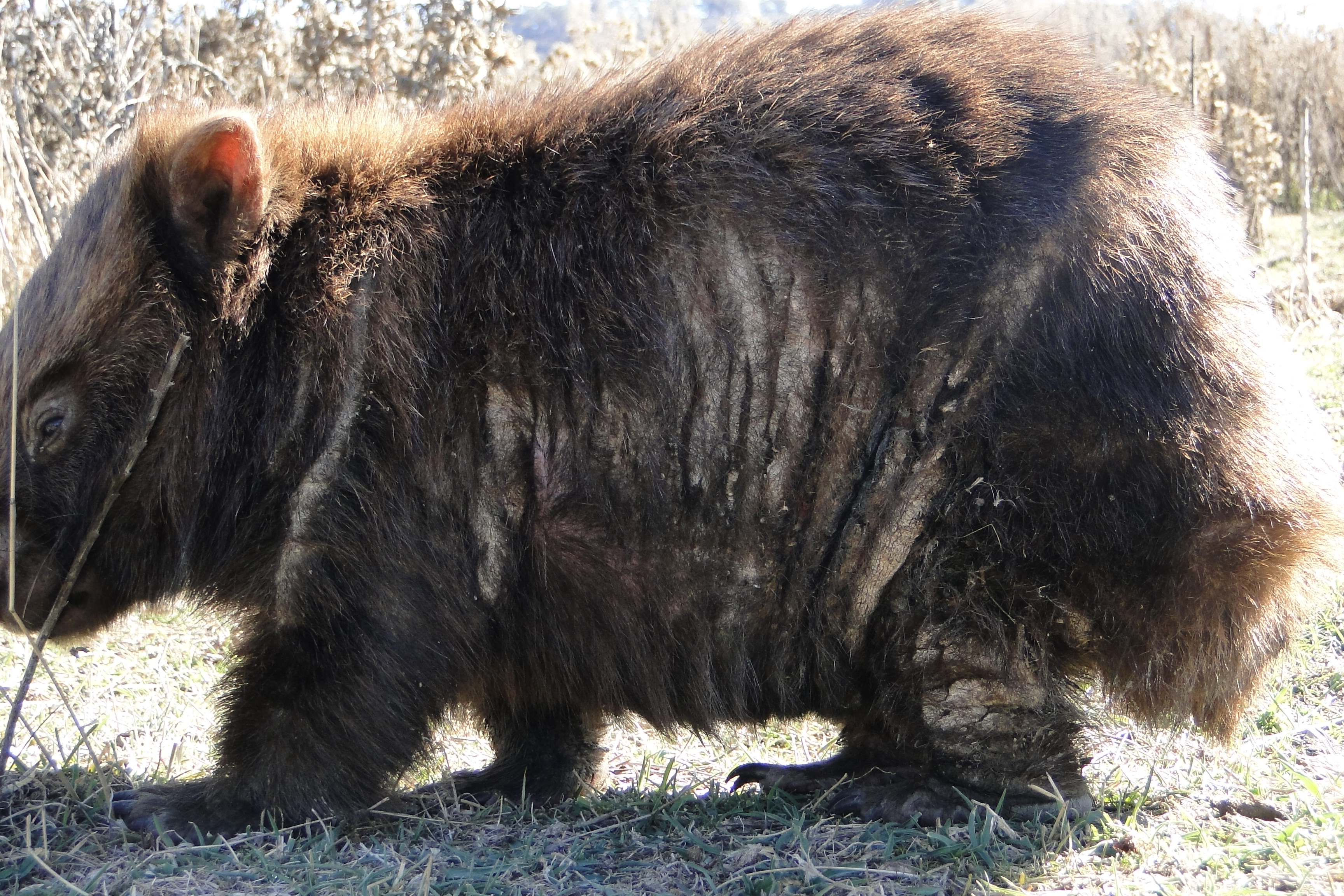 No animal should be allowed to suffer like this.